From NavalCoverMuseum
Jump to navigation Jump to search

Variant L indicates a non-standard arrangement not otherwise defined. If the postmark is a variant L, then no other variant codes are listed in its classification - even if they would otherwise normally apply.

There are occasions when the text or arrangement of the wording in a postmark defies classification. Among these are postmarks which have both "U.S. NAVY" and the FPO address (a combination of -1 and -2 variants). Other postmarks have wording arranged such that the "t" and "u" codes cannot accurately describe them. A few postmarks have been issued with the ship's ZIP code and even hull designation/number, but not the ship's name. The code L after a major type number indicates an unclassifiable arrangement. 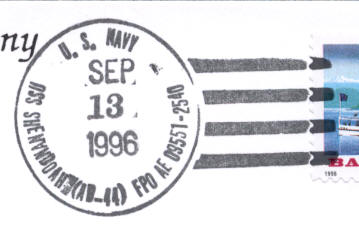 Also of interest, notice that the first "A" in Shenandoah is inverted.